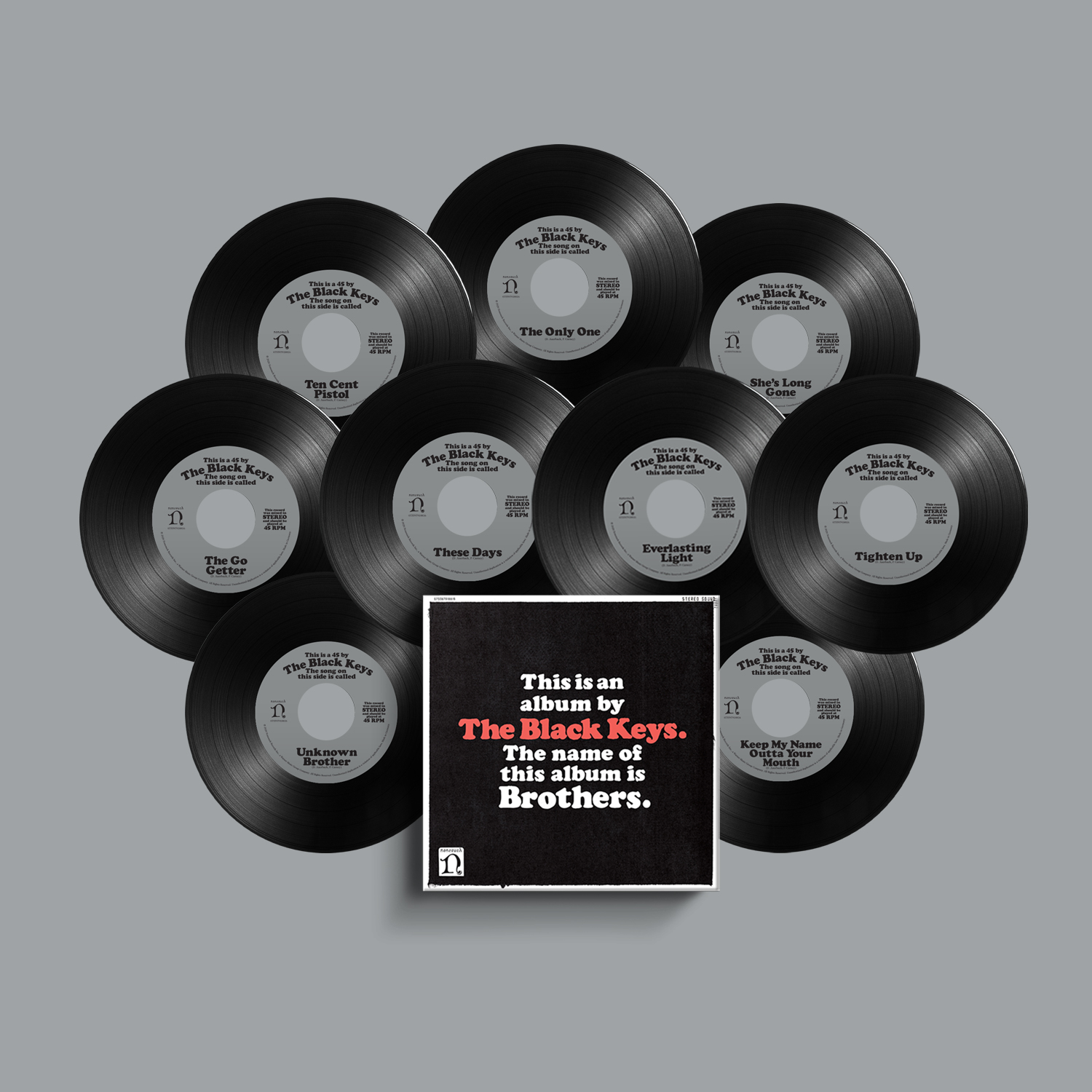 The Black Keys release Brothers (Deluxe Remastered Anniversary Edition), an expanded version of their watershed 2010 multi-platinum, Grammy-winning sixth studio album December 18, 2020 in the US and Canada and on January 1, 2021 in all other territories, via Nonesuch Records, on which the record is newly available throughout the world. To celebrate its tenth anniversary, Brothers will be re-released with three added bonus songs: “Keep My Name Outta Your Mouth,” “Black Mud Part II,” and “Chop and Change.” It will be available in three formats: a 7” box set, a 2-LP set, and a CD (full info about each below). This will be the first in an annual series of archival releases from the band. Brothers (Deluxe Remastered 10th Anniversary Edition) is available for pre-order here. The band today also share their promotional video for the release, directed by Bryan Schlam. Watch it here.

Members of The Black Keys fan club, The Lonely Boys and Girls Club, were treated to an early listen of one of the new tracks from the deluxe reissue, as well as an early look at some of the bonus material included in the upcoming release.

Brothers, originally released on May 18, 2010, was largely recorded at the famous Muscle Shoals Sound Studio in Alabama. It was a career breakthrough for The Black Keys, receiving critical praise and earning three Grammy Awards, for Best Alternative Album, Best Rock Performance, and Best Recording Packaging for Michael Carney’s design. Upon release, Rolling Stone hailed the album “a masterpiece,” and Uncut named them “one of the best rock ‘n’ roll bands on the planet.”

Although they realized upon their arrival in Muscle Shoals, Alabama in hot and humid August that the studio had seen better days, the band—singer/guitarist Dan Auerbach and drummer Patrick Carney—brought in their own equipment and proceeded. The oppressive Alabama summer weather "forced us into the studio,” Carney says. "We went into that darkness and stayed there."

The duo recorded nine of the original Brothers songs in what was now "a remote recording in a historic room that had been gutted," Auerbach recalls, adding that the location contributed to the vibe of Brothers nonetheless: "You can feel it if you're a musician, the great things that happened in a place. Half of the thing that we love is in our minds, but when we go to these shrines, it gives us inner strength. It feels magical—this is where the music was born."

The band recorded additional material in other locations: the album song “Tighten Up” in Brooklyn with Danger Mouse (Brian Burton), several others on Auerbach's eight-track in his Akron basement, and three in Mark Neill's home studio in San Diego. “Chop and Change” and “Keep My Name Outta Your Mouth” are bonus tracks on this anniversary edition of Brothers. The band then gave the music to Tchad Blake to mix. Carney recalls, “We told Tchad, 'Make it sound fucked up.'"

The album title highlighted a revived bond between the longtime bandmates and childhood neighbors, who had been through challenging times personally and professionally. Carney says, “I was thinking about what the record meant to me—how Dan and I had gone through this shit that brothers go through where you don't get along, but then you do get along and realize it's an unconditional love."  It was reminiscent of one of Auerbach’s favorite Allman Brothers albums, too: "As soon as Pat suggested it, I loved it.”

The Black Keys released their ninth studio album, “Let’s Rock,” via Easy Eye Sound/Nonesuch Records last year. The album received critical praise, with Pitchfork saying, “This is an album by the Black Keys called ‘Let’s Rock.’ That's what it does.” The Wall Street Journal said, “The Black Keys have mastered the form of guitar-based music, and the craft at work on these dozen songs is something to behold.” Upon release, the band was also featured in the New York Times’ Sunday Arts & Leisure section and were profiled on CBS This Morning, which can be seen here.

8. Too Afraid to Love You

●   60-page book of photos from the archives